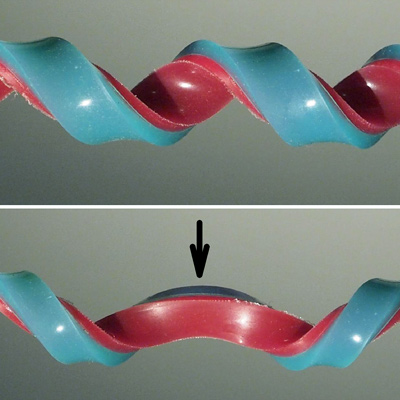 A simple experiment using rubber bands and cups of water is putting a new twist on helical geometry. Traditional telephone cords are coiled into helixes that spiral clockwise or counterclockwise. By securing one end of the cord while twisting the other in the opposite direction of the spiral, a rainbow-shaped boundary called a perversion forms at the intersection of the opposing twists. A helix with one or more of these perversions is known as a hemihelix. Although hemihelixes with a single perversion are commonly found in meandering plant roots and wool fibers, hemihelixes with multiple perversions have never been seen until now.